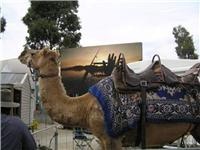 Kids 17 and under can see Priscilla free when accompanied by an adult at the Victorian Caravan and Camping Touring Supershow at Melbourne Showgrounds today.

Priscilla, as you would expect, is at The Waterhole. In this case Priscilla is a camel and the Waterhole is the collected attractions of the Northern Territory.

Adult pays $20 to see what is now the biggest show of its kind in Australia and Pensioners come through the gates for $16.

Priscilla and a cast of Territory friends will help with how to Do the NT onsite 360 which has won the Supershow's Best Exhibitor Award.

The kids can join the Caravanning Explorers Club, pick up a free show bag and enjoy free rides and activities including the Star Scream, Cup Saucer, Fun House Maze and the massive rock climbing wall. (Sunday only).

The Waterhole is right outside the Seminar Room where GoSeeAustralia.com.au is part of the presenter cast at seminar sessions to help you get more out of the great Australian outdoors.

GoSeeAustralias Garth and Lisa bounce of each other across the sexual divide with how to use free information from a website which has thousands of caravan parks and campsites listed. There are more than 2000 Information Articles on anything to do with road touring Australia.

They are quirky, on the road and their information is about now.

Darren Maggs is a real Former Army Special Forces Communications Specialist who will talk sense about how to make communications work in really remote places.

Gary Gardiner is the best there is on how to make caravan towing safer.

He not only explains how the technical stuff works, he can say what works best in specific situations.

If his exceptional seminar does not ring your bells then his Hayman Reese working rig on the company stand will. Lorna Henry goes the Wrong Way Round in a three-year epic adventure with an off-road camper-trailer. Western Australian Neil McGilp talks Outback self-drive trials and attractions and Peter Robinson involves his audience in caravan repairs and maintenance.

He understands solar set-up, how to get the best from a caravans load limitations, stop leaks and have a caravan brake controller which really does the job when you really need it.

10.30 am Rod Hannifey looks at Sharing the Road with Trucks.

11.30 am GoSeeAustralias Garth and Lisa bounce of each other with how to use freeonlineinformation fromGoSeeAustralia.com.auon thousands of caravan parks and campsites. There are more than 2000 Information Articles on anything to do with road touring Australia.