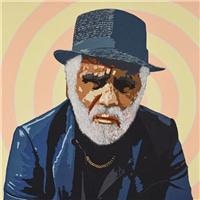 I went to the 2015 Archibald Prize, as I do every other year today at the Art Gallery of Ballarat and it is exceptional. Not just the Archibald Prize entries which are the best I have seen, but the Ballarat Gallery itself and its standing exhibits which are unique by any standards.

The Art Gallery of Ballarat is Australia's oldest and biggest regional gallery.

Thisis also the only viewing of the Archibald entries outside of NSW.

The Archibald will be in Ballarat again next year so we have already planned a return trip.

This year's Archibald's winner is Nigel Milsom with Judo house pt 6 (the white bird). The subject is barrister Charles Waterstreet. The piece makes me uncomfortable. This is a complex person in pursuit of justice. I feel Waterstreet can see right through me. I am afraid of the message his hands convey. There is weight in the hands. Pain in the hands. Like fingernails scrapped down a blackboard.

I walked in and was drawn to the third gallery by Thirteen Noahs. The work hit me right between the eyes. From a distance it looked like a collage, as I got closer I saw the subject was Noah Taylor by the artist Paul Ryan. I have had a secret love affair with the actor Noah Taylor my whole adult life.

So Paul Ryan's work Thirteen Noahs, oil on mixed found objects created immediate emotion in me. My love affair began when I first saw Noah Taylor in The Year My Voice Broke and I have watched him develop and age and now I see him in Game of Thrones.

Artist Paul Ryan uses objects he has found in Op shops as his canvas and oil paint as the medium.

Ryan paints Taylor as a fictional character in all stages of his life during his career. Thirteen paintings make up the complete collage and the whole depicts a complex characterisation of Taylor.

Next I was drawn into ME.

I am not talking about anything related to my ego.

ME is an acrylic on canvas by Richard Bell.

It took Richard Bell six days of painting on his kitchen table to paint himself as he sees himself.

Bell was born in Charleville Qld in 1953. This area is a south west Queensland outback town. The portrait depicts tough battler confidence, life experience and an attitude that screams independence.

I like him; I am drawn to him and relate to him.

Then the Archibalds hit raw emotion as I connected with Judy Cassab- portrait of an artist oil on Italian linen by Filippa Buttitta. The work is about a subject who was the first female to win the Archibald is 1960 and again in 1967.

Judy Cassab radiates the same hopelessness which shapes the face and actions of my so sick mother who is now also in a nursing home.

It took 20 sittings, at three hours each sitting, in Judy Cassab's nursing home for Buttitta to paint the magnificent 94 year old artist.

Cassab and Buttitta have much in common as they both started drawing as children, initially portraits of family and friends and both share a European background.

The Archibald Ballarat 2015 is on NOW until November 15 At the Art Gallery of Ballarat, 40 Lydiard Street North Ballarat.

Editor's Note: About the Archibald.

The Archibald is Australia's most prestigious annual portrait award.

The Archibald supports Australian artists and creates an opportunity to challenge the way we see politicians, artists, actors, celebrities, sporting heroes and by association ourselves.