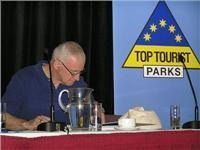 After 19 years with TTPA Bill Pycroft retires a successful long haul CEO. Bill is a driving force for TTPA from 1995 forward. That track record includes a time when driven, demanding, innovative, persuasive Hugh Deidrich was president. Bill talked about Hugh in his farewell speech. Hugh and Bill where a fit to fast-track TTPAs growth.

The Hugh Diedrich Award recognizes exceptional effort over the long-haul for the benefit of Top Tourist Park members. So when Bill Pycroft received it at the October 2006 Top Tourist Parks Conference in Canberra there was no doubt about it being deserved.

Jenny Diedrich presented the award which honors the memory of her late husband to The Top Tourist parks CEO. It was hard to say who was most pleased - Bill Pycroft or the Top Tourist Park members.

Some caravan parks try to be all things to all travellers with camping areas, camp kitchens, cabins (chalets, villas, and cottages), permanent/annual and on-site rental caravans.

Others, often euphemistically, describe themselves as resorts. They have bars, restaurants, supermarkets; swimming pools and convention facilities. Unfortunately the inconsistency of this scatter-gun market direction often leaves the consumer confounded.

As Top Tourist Executive Manager, Bill Pycroft told GoSeeAustralia - The reason why we introduced the (cabins) categories was because of consumer feedback, in some cases from international travellers, who commented on the inconsistencies when using cabins and moving from one park to another in relation to supply of certain items.

This way we hope to give the traveller some confidence that if they book a certain (cabin) standard they know what they are getting. Also, one of the biggest competitors for cabins is motel rooms. We need to compete, Bill Pycroft said.

Compete they did with great affect.

By 2008 TTPA was Australias biggest tourist park chain with more than 200 parks.

While the business model retained a welcome usually found in family owned or managed caravan parks.

Certainly Top Tourist has a business-like approach to everything we do, but we always look for benefits we can return to our members, Bill Pycroft said.

This is the Top Tourist Parks of Australia difference, he said in 2008.

How to cope with changes in the industry is a constant challenge for caravan park owners and managers.

Location is the number one priority, Bill Pycroft said.

And it certainly takes the right people to run successful Top Tourist Parks which rely on referred business, he said.

A straight down to business approach is not always a good fit for the Top Tourist product in the caravan park environment. The friendly Australian identity which is found in quality product like Top Tourist Parks is the point of difference which triggers referrals.

Another long-haul CEO, Stuart Livingstone, 41, left the Caravan and Camping Industry Association of SA with their best wishes to take over from Bill Pycroft. Stuart is afamily man with two daughters. Family holidays are important andLivingstone and his familyhave a camper trailer which they make a point of using regularly.

The Adelaide based TTPA group, has more than 210 Member Parks across Australia, and over 100,000 traveller club members.

Todays TTPA message on business plan direction has a familiar brave ring to it.

Hugh Diedrich put it in a nutshell