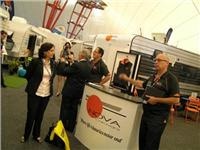 The new minister launched the biggest and certainly the best representation of the abilities of the caravan industry at Melbourne Showgrounds for the first time with comments which point to a positive attitude on caravanning and camping. She noted that theindustry is worth $1.4 billion per annum and employs more than 5000 people.

Lily DAmbrosio identified the caravan industry as an opportunity and model to help revive Victorias manufacturing structure in the face of the downturn in automobile building. 85 percentof all RV products are manufactured in Victoria (20,000+ units per annum).

Lily DAmbrosio is the Member for Mill Park. In November 2014 with the election of the Andrews Labor Government, she was appointed Minister for Industry, Energy Resources.

She joined the ALP in 1983 and was involved in many community campaigns including support for local jobs for the northern suburbs, fair pay and conditions for women in work, better public transport, decent schools and well paid skilled jobs for young people.

D'Ambrosio is a member of Labor women's network Emily's List and the Union of Australian Women. She is married to Deakin University academic and author, Andrew Scott, with two children.

Peter May said at the Melbourne Supershow launch the he is excited.

His comment must rank among the understatements of the year thus far. The Supershow is a massive undertaking with many new and as yet largely unknown challenges.

- 70% of all RV Manufacturers reside in Victoria.

-The industry is worth $1.4 billion per annum.

- 131,000 caravans and RV products are registered in Victoria (largest fleet in Australia).

- The industry contributes $453 million in salaries directly into the Victoria economy.

- 7 million Australians have had caravanning or camping experience in the past 2 years.

- Expenditure by caravanning and camping consumers is 7 billion annually

- The economic value of the industry amounts to $17.44 billion annually.

- In the year ending 31st January 2013, caravans experienced the largest growth of any vehicle type in Australia.