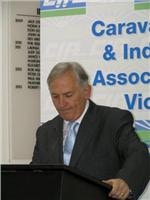 The Victorian Caravan, Camping & Touring Supershow will celebrate the move to their new home, the Melbourne Showgrounds with CIL Insurance returning as the major show sponsor in 2015.

Announcing the new sponsorship arrangement, CEO of the Caravan Industry Association Victoria, (CIA Vic), Rob Lucas, said he was delighted that CIL Insurance had returned to team up with the event to showcase the very best outdoor exhibition space in the state.

CIL Insurance and the Caravan Industry Association Victoria can trace their relationship back over 50 years. Having CIL Insurance back on board as our major show sponsor is like welcoming an old friend back home.

The Victorian Caravan, Camping Touring Supershow will enter a new era in 2015 as it moves to its new home at Melbourne Showgrounds and now, with CIL Insurance as its new major sponsor.

Ivan Owide, Executive Manager for CIL Distribution said he was very excited to come on board as the major sponsor for the Victorian Caravan, Camping Touring Supershow in 2015, especially as it makes its big move to Melbourne Showgrounds.

CIL Insurance has a long-standing and profound relationship with the Australian caravan industry having first insured caravans way back in 1962. With over 100,000 caravans now insured with CIL Insurance, the new partnership is a perfect fit for Australias biggest outdoors show.

This announcement is good news for patrons too, with CIL Travel Saver Card holders able to take advantage of 2-for-1 tickets on the Wednesday, Thursday and Monday of the Supershow.

Peter May, President of CIA Vic, said it is great to have such an established supporter of the industry sponsoring the 2015 Supershow.

CIL Insurance has always and continues to support the caravan industry and the association. For decades they have been the choice for thousands of Australian families to insure their caravan, the source of fantastic holiday memories for many of us.

The Victorian Caravan, Camping Touring Supershow in 2015 takes place from the 11th to the 16th of February at Melbourne Showgrounds.