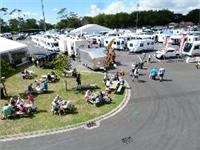 Next years Covi SuperShow dates are Friday, Saturday and Sunday 11, 12 and 13 of March 2016 at the ASB Showgrounds in Greenlane, Auckland.

A Covi release says there was a 21 percent increase in the number of visitors to the 2015 show with more than 18,000 people through the gates.

Show visitors all had the opportunity to win the Ultimate Road Trip, a 59 day MOTEK motorhoming adventure across America, Australia and New Zealand, worth $40,000 which was won by a stunned Libby Buttimore from Simpsons Beach in Whitianga on the Coromandel.

An excited Peter and Gail Urquhart from Takapuna were the winners of the $10,000 Covi Cashback competition. They purchased a new Jayco Silverline caravan from South Auckland Caravans Limited at the show which meant they were eligible for the draw. For Peter and Gail it was the first caravan they have owned after having hired motorhomes and caravans in the past.

The show is the only expo in New Zealand endorsed and supported by the New Zealand Motor Caravan Association (NZMCA). The association ran a successful National Rally in neighbouring Alexandra Park that attracted more than 700 vehicles, one of the biggest rallies the NZMCA has ever held with many also attending the Eagles rock concert at Mt Smart Stadium on the Friday and Saturday nights.