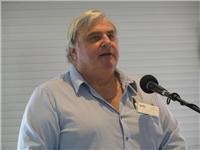 "Yesterday we lost one of the great legends of the Australian caravanning and camping industry", the Caravan Industry Association of Australia President Mark Lindsay said today.

Twenty five years ago, Richard Davis OAM was one of a group of eight people who were instrumental in setting up the beginnings of the national peak body under the original name of CAIR "The Caravan And Allied Industry Revival Campaign" designed to stimulate market activity and to address the declining fortunes at the time of the caravanning manufacturing industry.

This length of continuous service, however, is dwarfed by his commitment to the Caravan Parks Association of South Australia where he served as President for over 40 years stepping down in this position in August 2015.

Instrumental in industry change, Richard Davis has given outstanding service to Top Tourist Parks including a stint as Chairman, a position he held at the time of his passing.

Just last week, he launched to Top Tourist members a new direction for the organization with a new name, new branding and a new vision.

He was also the 'grandfather' of accreditation in the caravan park industry as he stroved to improve standards and product offerings within the industry.

Tourism, not just the caravanning industry has lost a great leader, Federal Chairman Mark Lindsay said. Every time we pushed the boundary's towards industry improvement, Richard was always right behind you challenging and supporting so that the industry fortunes could advance. His commitment and love for the industry was unquestionable.

Chief Executive Officer of the Caravan Industry Association of Australia Stuart Lamont spoke fondly of Richard Davis and was greatly saddened when hearing of the news.

Richard was a giant of support and one who thought firstly of others before himself. He was a gentle man who was incredibly generous in his time and service and willingly shared his knowledge and experience without hesitation. His enthusiasm for tourism shone through as he passionately spoke and championed for an industry he loved. There are many who are much the better for having known or crossed paths with Richard.

Some of his extended service and awards include:

Former Chairman of what is now known as Caravan Industry Association of Australia and Director from 1992- 2015.

President of the Caravan Parks Association of South Australia for more than 40 years.

Chairman of Yorke Peninsula Tourism for 14 years up to 2014.

Board member of Top Tourist Parks for over 16 years including a stint as Chairma.

Former councilor of the District Council of the Copper Coast.

Foundation member of the Quarter Club, a group which raises money to support Olympic, Paralympic and Commonwealth Games athletes.

Medal of the Order of Australia for services to South Australian Tourism (1999).

Richard Davis also judged the South Australian Tourism Awards for many years, and served on the Tourism Council of Australia and the Tourism Development Board.

In a moving tribute just a couple of months ago at a celebratory dinner for his service to the Caravan Parks Association of South Australia, fellow national Board member Dennis Austin described Richard in eight words: - Leader, Dependable, Loyal, Visionary, Genuine, Successful, Server, and finally Passionate.

Richard Davis was a successful businessman and a key player in the tourism industry who had owned caravan parks, a motel and hotels both in Adelaide and on the Yorke Peninsula.

It was bittersweet that he divested of his last caravan park just last month.

He suffered a heart attack at the completion of a rally stage at Mt Buller- fitting that as an avid car enthusiast and successful rally driver that he should pass away doing one of his great passions.

Richard Davis was a great man and one who selflessly gave so that others not only in the caravanning or tourism industry but the broader community could benefit, Mark Lindsay said.

He is survived by his wife Margaret.

It is with great sadness that we hear the news of the suddenpassing of Richard Davis. Richard suffered a reported heart attack at the completion of a stage of the Targa Rally at Mt Buller - as an avid car enthusiast and rally driver he passed away whilst pursuing one of his great passions.

Who could forget a few laughs over a glass of wine after one of our meetings or the annual conference. Richardwas such a jovial character who loved life and lived it to the full. As a friend and trusted colleague, he will be sadly missed.

Such tragic news. Richard was looking forward to winning this rally with his navigator Bill Best of RMS when we caught up at Gold Coast last week, GoSeeAustralia Sales and Marketing Manager Alan Hislop said today.