Jean Batten Rotorua's Daughter of the Skies made our world smaller 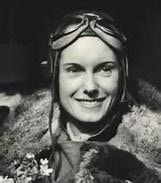 In 1909 Hine O te Rangi, Jean Batten CBE, "Daughter of the Skies", to the Te Arawa people was born in Rotorua. Te Arawa people arrived on the Arawa canoe in the mid-14th century from Hawaiki, the legendary home of all Maori in Eastern Polynesia (Hawaiki). They moved inland and settled in the Rotorua and Taupo-National Park area.

In 1936 Jean Batten (28) already recognised as a world celebrity New Zealand's pioneer aviatrix sent Auckland into raptures when she landed her tiny Percival Gull on a small grass airstrip at Mangere after crossing the Tasman in 10 and a half hours.

Emerging from the cockpit glamorous in makeup and white flying suit she was greeted by a crowd estimated at 6000. Jean flew 14,224 miles in 11 days 45 minutes direct from England to New Zealand and set a record which stood for 44 years.

Jean became the first woman to fly solo from England to Australia - and back in 1935. She smashed Amy Johnson's England-Australia record by five days in 1934 landing in Darwin in 14 days 22 hours.

In 1936 her touchdown in Sydney drew big crowds and intense interest. Next stop New Zealand. But before she tackled the Tasman she was criticised in a newspaper editorial about the potential cost of her rescue should she crash.

"If I go down in the sea no one must fly out and look for me. I have

chosen to make this flight, and I am confident I can make it, but I

expense to my country."

She took off at 4.40am, October 16, 1936. The flight took 10 and a half hours. Thousands on both sides of the Tasman hung on regular news updates of her flight as she battled terrible weather. News of her Auckland landing banked traffic up for 22km.

When she visited Rotorua Jean was gifted a chief's feather cloak and given the title Hine O te Rangi, "Daughter of the Skies".

Her interest in becoming a pilot was sparked when, in 1929, she met the Australian pilot, Charles Kingsford-Smith and he took her flying in his Southern Cross. He had become a hero when he made the first trans-Pacific flight (1928) from America to Australia in the Southern Cross.

A few weeks before her birth Frenchman Bleriot became the first man to fly the English Channel. Jean's mother Ellen cut out a newspaper report of the flight and pinned it to the wall beside Jean's cot. It was an omen for Jean from a free-spirited, strong, independent mother.

Jean and her mother are said to have been "incredibily close". From 1933 to 1937 Jean's flying skills reset and reset solo distance endurance records. Her 1936 England - New Zealand solo record stood until Judith Chisholm broke it in 1980.

The Percival Vega Gull G-ADPR Jean Batten flew into history on her England-New Zealand flight now stops hurrying jetsetters in their tracks as it hangs above their heads in Auckland's Jean Batten International Terminal.

In 1938 she was awarded the medal of the Federation Aeronautique, aviation's highest honor. She was the first woman to receive it. Jean's mother Ellen died in 1965 at 89 leaving her daughter desolate.

Jean Batten one of the greatest women aviators of all time died in Majorca in 1982 of complications after a dog bite. Her unmarked, communal paupers grave was later found in Palma. An obscure exit from a stellar performer. But her legacy was proof of the potential of air travel to make the world a village. And as always Jean Batten, Rotorua's Hine O te Rangi left flying solo.

To learn more Rotorua Museum in Government Gardens gets at the essence of Rotorua its people, culture and volcanic landscape. It opens from 9am to 8pm in Summer and 9am to 5pm in winter. Allow an hour and half for the experience.