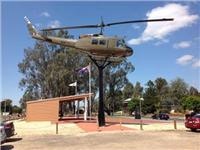 Mitchell Shire Council is creating caravan and bus parking at the eastern end of Seymour's Vietnam Veterans Commemorative Walk about two hours from Melbourne. The council aims to cope with big rigs.

There is also provision for installation of a dump point at a later date a Mitchell Shire Council spokesman said.

This is being worked through to meet restrictions imposed by the local water body, he said.

Seymour's Vietnam Veterans Commemorative Walk is in High Street at the junction of Emily Street and Tallarook Street, Seymour, Victoria. It is an experience which spans past and present and is certainly among Australias Go Make Some Memories road travel attractions.

The Mitchell sub branch of the Vietnam Veterans Association is the source of the unique commemorative walk project born in 2005 in collaboration with the Mitchell Shire Council. Recently panels which commemorate Victoria Cross recipients have been added. An interpretive centre is part of this remarkable Aussie memorial which has a Dust-off Huey helicopter as an entirely appropriate landmark. Among the young gums, which are part of the sites development program, is a war-like Centurion tank.

GoSeeAustralia met and talked to Vietnam Veterans as we took in the dedicated project.

Vietnam was part of GSA's youth. Your marble dropped and you were in; or it didn't. It was a volatile time. It brought truckloads of pain. Huge civil unrest. Conscription split the nation. An 18 year old could lay down his life for his country, but could not vote. Gough Whitlam changed that but the growing pains of the Vietnam upheaval lingers still.

But, regardless the Commemorative Walk is a positive force. This is not a traditional memorial. It is not intended to be. It belongs equally to the Vietnam Veterans and also to those who opposed Australia's involvement.

The Walk has been created using symbolic elements of Vietnam and 106 DigiGlass panels are inscribed with 60,000 names of every serviceman and servicewoman who served in the conflict. Eleven tracker dogs are included too with an image of Justin and his Digger mate handling the hot climate.

Seymour has a proud military history going back to the Boer War and the major training facility Puckapunyal is 12km west of town. There is more to be done on the Commemorative project and Stage 3 will include the installation of further artifacts and the building of car and caravan parking with a dump point on the eastern end of the Walk.

Vietnam is now our second longest war. The Australian War Memorial says Australia's military involvement in the Vietnam War is second only to the nations commitment to Afghanistan.

Almost 60,000 Australians, including ground troops and Air Force and Navy personnel, served in Vietnam; 521 died as a result of the war and over 3,000 were wounded.

The war was the cause of the greatest social and political dissent in Australia since the conscription referendums of the First World War.

Many draft resisters, conscientious objectors, and protesters were fined or jailed, while soldiers met a hostile reception on their return home.

The arrival of the Australian Army Training Team Vietnam (AATTV) in South Vietnam, also known as the Team during July and August 1962 was the beginning of Australia's involvement in the Vietnam War.

Australia's participation in the war was formally declared at an end when the Governor-General issued a proclamation on 11 January 1973. The only combat troops remaining in Vietnam were a platoon guarding the Australian embassy in Saigon, which was withdrawn in June 1973.

In August 1966 a company of 6RAR was engaged in one of Australia's heaviest actions of the war, in a rubber plantation near Long Tan. The 108 soldiers of D Coy held off an enemy force, estimated at over 2000, for four hours in the middle of a tropical downpour.

When the Viet Cong withdrew at night fall they left behind 245 dead, but carried away many more casualties. Seventeen Australians were killed and 25 wounded, with one dying of wounds several days later.

The year 1968 began with a major offensive by the Viet Cong and North Vietnamese Army, launched during the Vietnamese lunar new year holiday period, known as Tet.

Not only the timing but the scale of the offensive came as a complete surprise, taking in cities, towns, and military installations throughout South Vietnam.

By late 1970 Australia had also begun to wind down its military effort in Vietnam. The 8th Battalion departed in November (and was not replaced), but, to make up for the decrease in troop numbers, the Team's strength was increased and its efforts became concentrated in Phuoc Tuy province.

The withdrawal of troops and all air units continued throughout 1971 the last battalion left Nui Dat on 7 November, while a handful of advisers belonging to the Australian Army Training Team Vietnam (AATTV) remained in Vietnam the following year, The Australian War Memorial says.

In December 1972 they became the last Australian troops to come home, with their unit having seen continuous service in South Vietnam for ten and a half years.

Australia's participation in the war was formally declared at an end when the Governor-General issued a proclamation on 11 January 1973. The only combat troops remaining in Vietnam were a platoon guarding the Australian embassy in Saigon (this was withdrawn in June 1973).

The Australian War Memorial reports that total Australian service casualities in the Vietnam War, 1962 - 72 were:

Since Operations in Afghanistan commenced in 2002, the Australian Defence Force has suffered 40 combat deaths and 260 wounded in action. Two Australian Government civilians have also been wounded. Further details click here. http://www.defence.gov.au/operations/afghanistan/personnel.asp (If the link does not open cut and past into your browser). If Google Chrome fails try Mozilla Firefox. Some links on the Defence website lead to information which needs updating.

Acknowledgement This Information Article is provided through the support of generous sponsor Caravan Industry Association of Victoria (CIA Vic.). This support covers story research costs. It is because of sponsors like CIA Vic. that an extensive library of free Information Articles is available to help users Go Make Some Memories. Click to find road touring destinations two and three hours from Melbourne.