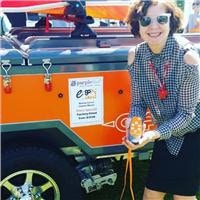 CIA Vic, is notable for its established strict, 'take no prisoners' policy on industry compliance to Australian Standards.

Rob Lucas told a bevy of Media, as he sent Leisurefest into full stridelast Thursday morning, that compliance and safeguarding the best interests of caravanning industry customers has an additional sharper focus.

Scrutiny steps up on accessories, he said. The aim ASAP is that nothing gets into a CIA Vic show until it toes the compliance line.

This will be bad news for those who dump shoddy, non-compliant products into the Australian caravan and camping market, as they trade on the Australian Standards quality commitment of the majority of builders and suppliers.

It uses the new Universal Energy Selection (UES) control system to pull off that useful trick.

The Dometic RM 2356 absorption refrigerator has a 95 litre capacity. The concept is convenient for caravans, motorhomes and campers.

The Mitchell has a heavy duty hot dipped galvanised chassis.

There is a five year structural warranty on the chassis and suspension.

Pioneer holds a Green Kangaroo accreditation, as a recognised supplier to the Department of Defence. All of the welding toits chassis and suspensions are performed by qualified welders, with written weld procedures that comply with AS1554.

With a staff of more than 75, Pioneers mission is to keep jobs in Australia.

AL-KO's Electronic Stability Control (ESC) is not a new release, but the swerve and recovery test on the main straight at Sandown drew a steady stream of Leisurefest fans.

GoSeeAustralia is a believer in the ESC automatic caravan stability safety aid.

For anyone with Off-road caravan adventures in mind this well researched and engineered product is worth consideration.

Opus has a new All-road Camper. It is so lightweight with a 1050kg Aggregate Trailer Mass (ATM). It hooks up with small vehicles like the Hyundai i30. But the accommodation provided by the Opus range from Purpleline provides huge amounts of camping comfort. I used the E-go remote control mover. I was moving a camper with my finger, Forward, back and around in a circle.

GoSeeAustralia.com.au and its Kiwi sister site GoSeeNewZealand.co.nz allow access to a library of Information Articles which approaches 2000. Anything held in GoSee's secure database can be found using the unique Multi-search at the top right of the Home Page.

Click search and everything GSA and GSNZ knows about the subject is revealed.

As an exampleat the end of this Information Articleare hyperlinks to Information Articles which reflect Research and Development by AL-KO and Opus, plus a feature on the key Industry Blueprint whichhelps takecaravanning and camping in Australia forward.

Stories on GoSee do not drop out of sight once they leave the HomePage.

They are cross linked and the unique Multi-search makes them instantly available.

To boost that service Information Articles like this Leisurefest feature usually carry hyperlinks to related information.