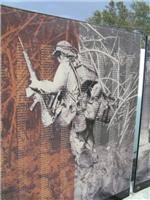 The 2015-16 Victorian Budget provides $1 million to host a Vietnam Veterans Parade commemorating the 50th anniversary of the Battle of Long Tan and associated commemorative activities.

Heavily outnumbered but supported by strong artillery fire, 108 young men from D company 6 RAR held off a regimental assault in a defining feat of Australian Arms.

The Parade will honour the 108 young men from D company 6 RAR who resisted an attack of more than 1500 Viet Cong soldiers in one of the defining chapters of Australias military history.

The Australian War Memorial says there were 18 Australians killed - 17 from D Company and one from the 1st Armoured Personnel Carrier Squadron - and 25 wounded. The Viet Cong insurgents left 245 dead and many more wounded.

The Victorian Budget also provides $400,000 to support the wellbeing of veterans and their families, working with the RSL to safeguard the welfare of the men and women who served our country. The Budget includes $5 million for ANZAC Centenary commemorations.

As we reflect on the Centenary of the Gallipoli landings and mark 50 years since the Battle of Long Tan, its our duty to remember those who made the ultimate sacrifice.

These are some of the most defining moments in our history. The memories are forever etched in our national story, but we must pass them on to the next generation of Australian kids.

Veterans protected us and its our job to protect them. Well make sure veterans and their families get the help they need to maintain a decent standard of living. Theyve earned our support for the rest of their lives.

Editors note: The Battle of Long Tan on August 18, 1966 was fought in monsoon rain in a rubber plantation near Long Tan in Phouc Tuy Province South Vietnam during the Vietnam War. The action was fought between Australian forces and Viet Cong and North Vietnamese units after 108 men from D Company, 6th Battalion, Royal Australian Regiment (6 RAR) clashed with a force of 1,500 to 2,500 from the Viet Cong 275th Regiment, possibly reinforced by at least one North Vietnamese battalion, and D445 Provincial Mobile Battalion.

These Information Articles from the GoSee free library will help with more background on the Vietnam War: