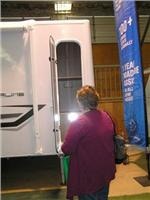 Wodongas 4th annual Border Caravan Camping Expo set a whole new standard for the size and variety of displays and patrons liked what they saw exhibitors reported an enthusiastic response to the spacious new layout and the greatly increased variety of products on display, with strong sales across the board.

The Caravan Industry Association of Victoria (CIA Vic) was more than happy with the result for its official industry show, with attendance close to last years figures of 11,500.

CIA Vic Chief Executive Officer Robert Lucas said the attendance was strong throughout the three-day show, despite being dampened by persistent drizzle on the Sunday.

There is no question about it this show has really come of age, and we are locked in for the next three years to fill the entire expanded site we used this year, he said.

The big indoor displays mounted by Jayco and Avida, both with their own dedicated halls, made for many more caravans, trailers, motorhomes and campervans even fifth-wheelers for patrons to inspect.

Several manufacturers took the opportunity to expand their sites and display all or most of their models, so people could see exactly what the different models had to offer.

Thanks to the extra display space, along with a general upgrade of the racecourse site, the whole show was easier to navigate, and we had plenty of new products too.

A highlight was the enthusiastic response to CIA Vics charity raffle of a unique 23ft family caravan worth over $78,000 for Kids Under Cover to help prevent youth homelessness.

Mr Lucas said more than 1,000 tickets were sold to show patrons, in addition to those already being sold by CIA Vic members through Victoria.

Tickets will also be on sale Melbourne Leisurefest at Sandown Racecourse, where the winner will be drawn on 5 October.

The big news is that we now have online sales at www.gomakesomememories.com.au Just click on the Shop tab and buy a book of tickets not only is it a great prize, but will you be supporting a very good cause.

Here are GSA impressions of the Border Expo in pictures: